The restaurant menu is not just a list of dishes and drinks that are available to order here and now. Its meaning goes far beyond a small piece of cardboard or paper with printed information for a guest. Along with waiters and other venue’s staff, the restaurant menu is meant to establish contact with visitors, gain their favor, prevent them from leaving the venue, and, most importantly, to motivate the guests to visit your restaurant, cafe, or hotel again and again.

Therefore, the process of the menu planning, developing, and designing was, is, and will be a critical stage in the restaurant business development. In the history of mankind, there are examples when the right establishment’s menu became a symbol of success. At the same time, there are fundamentally opposite stories when the business was almost ruined due to negligence towards the menu.

The origin of the restaurant menu

In some sense, a menu is a link between a guest and a venue, something like an oral agreement. When the waiter invites the visitor to view the menu or the menu appears on the restaurant’s website or social networks - this is how your establishment makes a public offer to the client. This means that the staff commits to prepare the dish exactly following the description and the specified ingredients.

For centuries, guests of catering establishments simply went inside the venue and found out what the chef was preparing on that day exactly on the spot. The very dish or several dishes were what they would eat. Years later, when cafes and restaurants developed and began to compete with each other, they started to offer guests different options. And to present clients these options, paper and tablet menus appeared.

The first printed menu is believed to appear in Paris. Menu options close to modern ones began to be produced in the XIX century. And the reason for this is simple: it was then when new printing techniques began to appear actively, allowing to supplement text in a beautiful font with attractive and extraordinary pictures. In expert circles, the first modern version of the printed menu is considered to be a document from 1855, created in honor of Empress Eugenie at the court of Napoleon III.

By the way, even after paper menus appeared, the list of dishes and drinks didn’t take center stage. The focus was given solely to the cover as it was meant to attract the attention of potential guests. For this reason, naked women were often pictured on the face. The opposite rule was used in the dish list design: the more decorative elements, the more difficult it is to read and choose. Thus, the menu itself looked minimalistic. 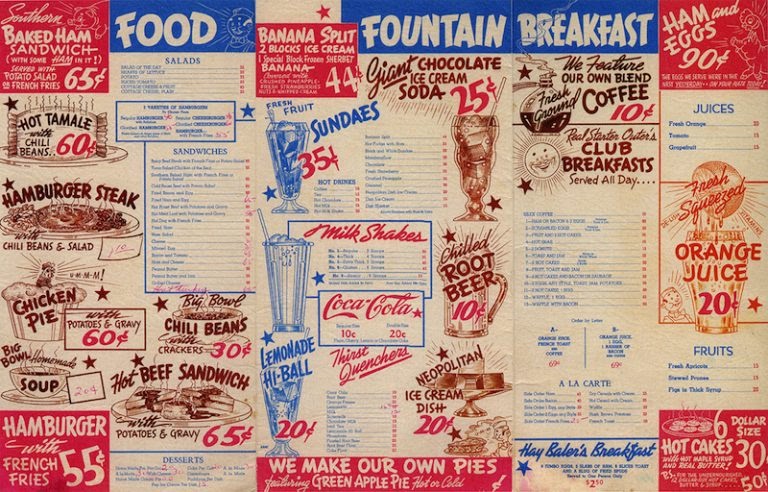 Therefore, simplicity prevailed in design and printing. The menu included traditional categories: appetizers, main courses, side dishes, and desserts. The list of ingredients was either absent or was minimal so as not to take up space on paper. Elite restaurants were an exception: menus in such establishments were more detailed, with beautiful names and vogue French words that were popular at that time all over the world. In such a way, these establishments justified their price level.

In whole, restaurant menus were very standardized. Only at the end of the ХХ century it became possible to develop the design and presentation of one's establishment through printed materials. Eventually, venues got an opportunity to create new styles, formats, and regularly change menus ... However, along with such opportunities, restaurants had new expenses: on design, printing, and replacement of old menus.

Do you know what makes the ХХI century menu different?

It no longer needs to be drawn up in the usual format - to be printed, handed over to the guest, then taken back, cleaned, stored, and updated ... It has outdated in all senses since now guests can use their smartphones. The main thing is that establishments no longer need to allocate a separate budget for these needs.

Modern restaurant menus don’t need to be printed because the whole globe has plunged into the online world long ago. Restaurants have managed to completely stop using printed menus, offering their guests a black and white barcode that, when scanned by smartphones, will redirect the guests to a full QR menu. Since users are used to finding all the necessary information on the Internet in several clicks, the way of seeing your restaurant's offer in digital format takes root quickly (or rather, it has already settled down all over the globe).

Therefore, new relevant and convenient menus with access via QR code are confidently replacing old versions. Don't have an online menu yet? Believe us, it's time to find out about the touchless menu and try it!